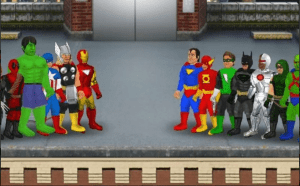 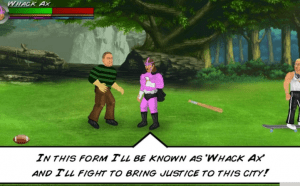 Create your own superhuman and cross paths with 150 heroes and villains in the ultimate shared universe! Decide where your loyalty lies as you run out of your own loyalty story and fight for control in every corner of Super City. Inheriting a higher average combat system from the wrestling series, this game supercharges the action with new power, technology, costumes and locations!

Upgrade to save your changes to all changes and make the world your own. This includes the beginning of a character of your choice and will never end until you like it. You can also enjoy setting up your own “Fight Scene” to let off steam without any pressure!

Control:
Look for hints in-game, but have the following basic controls:
A = Attack (with high target direction, low target self)
G = grapple
A + G = Block
R = Run (double tap to jump or fly)
A + R = large attack
P = pick-up / drop (including throwing direction)
R + P = set fire
T = Tant, use prop, hold release
S = special power
* Tap the portrait to convert (once activated).
* Touch the clock (or bottom of the screen) to pause the game.
* Tap Speech Bubbles to speed up the conversation.
* Pinch in the middle of the display to zoom in or out.
www.youtube.com/MDickieDotcom

The Super City depicts a fictional universe. Any match between the true character of the past or the present is a pure coincidence.